I am trying to solve a two-body problem in the American West. Here's my CV. Also check out:

Usability enhancement: Cut the nonsense, I just want to buy some magnets...

July in Los Angeles saw a sudden spike in the all-around asshattery of drivers during commute hours. In the past I've found that a gentle conversation can go a long way to reminding folks that even though, yes, you're on a bicycle, you in fact don't deserve to die; this summer, though, the number of close calls, shouts, and other incidents of adults behaving like children surpassed all previous records. Had I stopped to talk to each perpetrator, I'd never have gotten where I was going.

Since I'm generally going to work or home from work, “never getting there” isn't much of an option.

I found myself wishing there was some other way of providing a lasting remind to share the road. When I get frustrated by these kinds of situations, I decompress by producing amusing tchotchkies, and this situation proved no different. While the solution might confuse ICP, it's probably clear to anyone else: magnets. 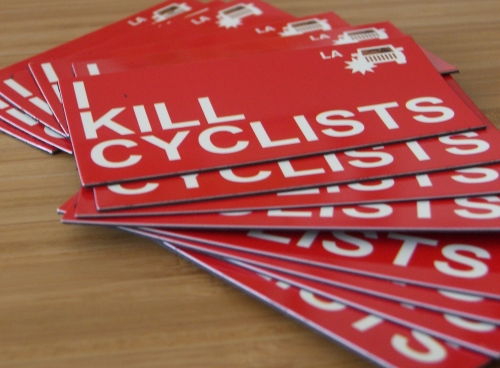 Because I feel like I make a strong showing in my (now closed) crowdfunding campaign, I'm copying my description here.

As seen in the wild, on a refrigerator.

Making individual magnets is prohibitively expensive, so I'm sitting on a cache of a few hundred that are just waiting to be stuck so some ferrous surface. Again, from the crowdfunding campaign:

“
Any magnet you purchase and apply will help any person seeing the refrigerator to which it is stuck think deeply about the danger that inattentive and angry drivers pose to cyclists.
”

Shipping is included; I'm not evil.

If you're not interested in placing your magnets on a refrigerator, I'm sure you'll be able to figure something out. 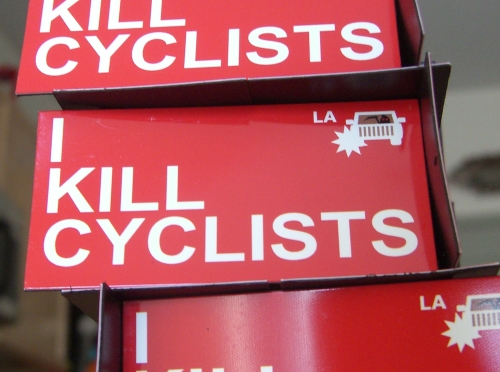 Building a card house with magnets is kind of easy because... they're magnets.

As usual, I'm releasing the design into the world as an easily-editable SVG file under no license whatsoever; credit would be nice if you choose to use it. Note that the document itself is 3.25" x 1.75" rather than 3.00" x 1.50": the producer required 0.125" padding on each side to account for printer bleed and offset. 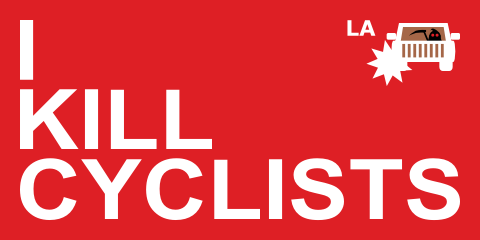 The vehicle "seal" is derived from my earlier venture into commemorative graphics. The vehicle itself is identical; the driver in the current implementation looks a little more invested in harming whoever he's running over. Feel free to modify whatever you see fit for your own hometown.

my (new) own hometown

The day I received the magnets in the mail, I packed up and moved to Denver; life is funny that way. My personal impression of my new home — generally corroborated by other biking folk — is that Denver drivers are really and truly friendly to cyclists. Good on them.

However, they behave abominably toward pedestrians. This is probably related to the fact that Denver is a lawless little town where jaywalking (even in front of The Man) is accepted as a way of life; drivers attempt to kill people on foot mostly to scare people back onto the sidewalk. 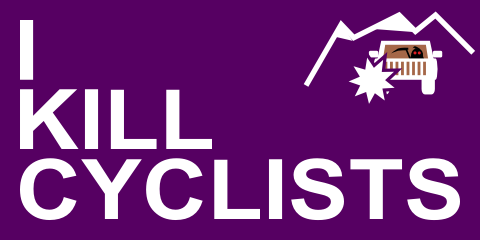 Sure, the Rockies barely broke .400 in 2014, but I'm too attached to the Steelers to propose an orange magnet.

I've had trouble fitting the word “PEDESTRIANS” on the last line. And the mountains need some work. I tried enlarging the tires to make the car look more like a pickup. Frankly the thing looks a mess and could use some polishing. Conceptually, though, I think it's strong.

If you feel like implementing this for Denver, grab the Denver proposal SVG and edit away. Standard do-what-you-want-but-say-thank-you rules apply.

Included \(\LaTeX\) graphics are generated at LaTeX to png or by